Fall weather has finally hit St. Louis (though it’ll be in the 70s again later this week) and for a few days it’s been glorious having the windows open and the AC off. We’re on an upper floor so it gets hot quickly meaning the AC kicks on a lot even when you’d think the weather doesn’t warrant it. Yay for high electric bills! I will be SO happy when the cooler weather is here to stay.

On to more important things! I wanted to chime in on a couple of sports related items from the weekend. The Rams won a game that they were supposed to win, which is both news and not-news because while they were expected to win against arguably the worst team in the NFL, the Jacksonville Jaguars, the Rams looked like they were going to falter and blow this chance for a sure victory. Thankfully, they recovered in the 2nd half to edge the Jags 34-20. Jacksonville tried making it interesting so it wasn’t a blow-out mostly because the Rams squandered a number of opportunities to score more touchdowns thanks to the continued poor play calling from Offensive Coordinator, Brian Schottenheimer. 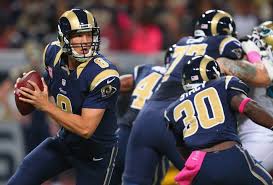 Having the same OC for a second year in a row was supposed to help Rams QB Sam Bradford take his game to the next level. The Rams added a number of new offensive weapons in TE Jared Cook, WRs Tavon Austin & Stedman Bailey, RB Zac Stacy, and OL Jake Long, but so far their offense has been well, offensive. Stacy finally got a chance to start Sunday and while we have to remember the Jags have a terrible run defense, Zac showed he’s got some game and I hope he’s the revival of the Rams running game we’ve been waiting for since the departure of long-time Rams anchor, Steven Jackson.

If the running game can get something going, maybe Schottenheimer will finally take off the training wheels and get this offense rolling on a regular basis. It might not matter much if the Rams can’t cut down on the penalties, especially on Special Teams. TWO very nice Austin punt returns were called back due to infractions, and the Rams lead the league in penalty yards after 5 weeks of play. You’re not going to make the playoffs with that lack of discipline.

I know, they won, why am I complaining so much? It’s the Rams, I’m used to only having negative things to say. Give me another win or two and maybe I’ll break the habit. Another interesting tidbit from the game was that it marked the return of former Parkway West Highschool and Mizzou Tiger stand-out QB, Blaine Gabbert to his hometown. His first visit back to the ‘Lou was less than stellar as he played poorly and suffered a leg injury that removed him from the game. Better luck next time Blaine.

The Cardinals were in action Sunday in Game 3 of their NLDS against the Pirates in Pittsburgh and it didn’t go well for St. Louis. They fell 5-3 and are now one loss away from being eliminated from the playoffs. They’ll play another road game tonight and hope rookie Michael Wacha can get them a win to tie the series and bring it back home for a decisive Game 5. I’m not going to stress out about the Cardinals. They’ll either win or they wont, and there’s nothing to do but wait and see. Pittsburgh has had a monster year, and have played well against the Cards, so it could really go either way.

As a reminder, head over to BleedinBlue.com to read my comments and opinions on the St. Louis Blues and the NHL. I’ll have a review of Saturday’s game up later today.

I may have mentioned running in the Warrior Dash a couple Saturdays ago. I hope to take some time to post some pictures of the aftermath soon. The memory of the race will be with me for weeks to come, guaranteed, because I bruised my tailbone and it still hurts like hell, though I don’t regret any of it and I’d do it again next weekend if it was there. Next year for sure.

As a note for myself, I’m hoping that this kind of rambling will somehow spark or inspire me to write more often again and get back into the habit, we’ll see. Life is still crazy and busy and exhausting. Thanks for reading!

No, I’ve not posted here in a long time or really written much of anything in a long time. Life gets in the way of the things we love sometimes, eh?

The Boys I speak of above are, of course, the St. Louis Blues of the NHL. The Blues opened their season with a home game last night against the Nashville Predators with a big win! Words cannot express how excited I am about hockey starting again, and like last year, I’ll be writing about the Blues over at BleedinBlue.com.

I’m not the only great writer (see what I did there?) on the BleedinBlue.com staff, so be sure to browse thoroughly, there’s a lot of good stuff there and with a full season (thank the Hockey gods!) there will be even more content this year than last.

I will once again be wagering the success of the Blues against some friends and their respective hometown teams, though it’s more of a “Twitter Friend Bet” this year, as one of them is more or less (semi?) retired from blogging.  I won last year and I think I’ll win again this year. I’m already up a point on the Wild and 2 on the Flyers. Yes, J, SD, I went there, whatcha gonna do about it? 😉

One of the beautiful things about October, and one reason Fall is my favorite season, is that in addition to hockey starting up, the MLB playoffs have begun, and it’s always more fun when the Cardinals in involved. They murdered the Pittsburgh Pirates in Game 1 of the NLDS at Busch III last night, 9-1. The Pirates are the media darlings this year, the little engine that finally could, and while it could be a good series, the Birds on the Bat are off to a smashing start. Game 2 is another home game this afternoon. GO CARDS!

Stay tuned to this station for commentary on the Cardinals and Life in General and be sure to check out BleedinBlue.com for Blues news and notes. Thanks!