Some people think it’s funny to say that I am a grumpy old man. I’ll be 40 in less than two months and I’ll admit, there are times I feel old, though I know 40 isn’t old. Old fashioned, probably, in many ways, but and old man? No way. I’m in the best shape of my life, how could anyone (you know who you are!) think I’m old? I’ll tell you how, and while I know I’m not alone in feeling this way, it IS pretty funny when you step back and think about it. Unless you’re me, and you just can’t *stand* when things are TOO LOUD.

I live next door to a supermarket. My bedroom window looks out over the parking lot and while there is a barrier of some skinny trunked trees and a privacy fence, those do not block all sound coming from the lot. The one saving grace is that it’s not a 24-hour store, but it’s still noisy. Laying in bed at night I’ve been treated to the sounds of the street sweeper truck and/or the truck that literally drives the lot VACUUMING up trash (I’m guessing) and this seems to happen around 11PM. They also patrol the outer edges of the lot, which again is directly adjacent to my apartment building, with LEAF BLOWERS. AT 11PM. It’s TOO LOUD OMG DON’T THEY KNOW I’M TRYING TO SLEEP?

On any given day, from 6AM until the store closes around 11PM you can hear car alarms going off, 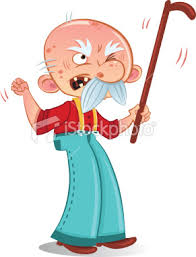 always for too long, over in the lot. Almost every night after closing you can hear the night crew, who apparently all park along the side of the lot that faces my bedroom windows, leaving work, (slowly) getting into their cars, laughing, carrying-on (that’s an old man kind of term, right?) revving their engines, and just generally being TOO LOUD for 11:30PM-Midnight.

Sometimes, when I’m home at lunch time on a weekend, the store employees hang out in their cars during their breaks, BLARING their stereos and smoking cigarettes. One day I went over there to tell the person off (like a grumpy old man would) but of course by the time I got there the guy had shut it down and was heading back into the store. I left well enough alone, but I was grumpy.

I have had daydreams of shooting a bazooka from my bedroom window at the cars with alarms going off, or yeling with a bullhorn at the people being TOO LOUD while I’m trying to sleep. Apparently I’m the guy who would actually be found yelling, “Cut out that racket!” or “Get those damn kids off my lawn!” I supposed it’s a good thing I don’t have a lawn.

This post was inspired by the weekly prompts at Studio30 Plus, you should go there and join, read, and enjoy!