I’m a huge fan of music, almost any kind.

I listen to it in my car, where I have The Shins four discs lined up in chronological order and listen to them over and over again. I don’t care for the radio because the DJs in my town are terrible, almost entirely. If there’s a good one he or she isn’t on a station I’d care to tune in. That’s part of the problem too- I like variety, and I like a lot of music that just isn’t played on the radio. I also like to listen to classic music while I’m driving. That has to be on CD as well because in Their infinite wisdom, the Powers That Be decided maybe a year ago to ditch the city’s only classical radio station.

I listen to my iTunes library on shuffle while I’m at the gym. It plays a lot of what I would call techno, “house,” and electronica because I like the heavy beats while I’m working out, especially while on the elliptical trainer. There’s some pretty heavy metal in there, something I’ve been able to accquire a taste for in particular moods or again, while working out. Hip Hop, Rap, Pop, it’s probably all in there. Might even be some holdovers from my daughter’s influence: Katy Perry, Ke$ha, Kelly Clarkson, Pink, etc. though I can’t honestly say I dislike all of that type of music. And it’s not to say in the least that I don’t like female musicians. I love them, just not all of them or all of any certain musical genre. My iTunes library is about as diverse as they come, I’d like to think anyway.

I listen to music when at home now, more than I used to. I’ve not been able to get into streaming services like Spotify yet. I like the idea of being able to listen to what my friends are listening to, and to be able to share my own selections, but I haven’t “taken the plunge.” I usually listen to my iTunes library but I’ve also started surfing YouTube and finding a lot of really good music I might’ve otherwise missed. A lot of what I’m watching and listening to is stuff I already know, maybe live versions of Shins tunes, or even trying out random viewers’ attempts to cover those songs.

Over the weekend I found myself listening to some bluegrass- a genre I like a lot but haven’t spent much time with lately. I’ve always enjoyed listening to a really good guitar or banjo player cranking out sweet riffs and, coming from a vocal background of sorts, listening to the harmonies often found in bluegrass is definitely a pleasure. Last night I listened to some Steve Martin picking, and some Alison Krauss with Union Station live versions. Good stuff there.

I also found myself compelled this past weekend to finally, after literally at least a year, probably longer, restring my acoustic guitar and start playing again. I’ve never been very good because I’ve never put much time into playing. I can strum some basic chords, and given enough practice, even pick out a song here and there, but my fingerwork is woefully weak. I plan to play a little every night until my fingers are more flexible and get used to the strings again. Hello, callouses on my fingertips again! 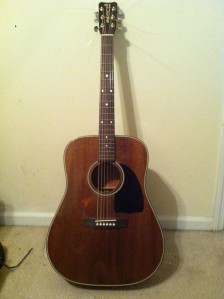